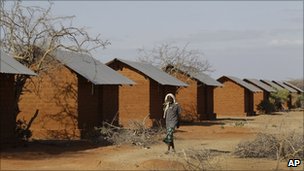 Kenya has agreed to open a new refugee camp near its border with Somalia, as thousands of people flee the region's worst drought in 60 years.

Prime Minister Raila Odinga said the Ifo II camp, which can fit up to 80,000 people, would open within 10 days.

Some government ministers had feared opening the camp would encourage more Somalis to cross the border.

Announcing the move, Mr Odinga said: "Although we consider our own security, we can't turn away the refugees."

Mr Odinga had earlier visited the nearby Dadaab refugee camp, where he said the situation was unacceptable.

Aid workers say conditions at the camp - which is made up of three settlements - are desperate. About 370,000 people are crammed into an area set up for 90,000 people, they say.

But the prime minister rejected criticism that Kenya should have opened Ifo II earlier. He said Kenya had lived with the refugee crisis for 20 years and had been asking the international community for help all that time.

"They are only now responding when they see people are dying. The international community is always very later in acting. So the Kenyan government is a victim, not the accused."

Mr Odinga said Kenya would not take responsibility for the logistics of opening the Ifo II camp.

"It's up to the UNHCR [United Nations High Commissioner for Refugees] to work on the modalities and how they can move into Ifo II," Mr Odinga said.

The UNHCR had been urging Kenya to open the camp for the past two years but the government stopped work on it earlier this year, citing security concerns as one of the reasons.

UNHCR chief Antonio Guterres on Monday held talks with Kenya's Internal Security Minister George Saitoti to appeal to him to open the camp.

The BBC's Kevin Mwachiro says the announcement the camp will open could not come at a better time. He says more than 1,300 refugees are crossing into Kenya from war-torn Somalia every day.

On Wednesday, Kenya's Assistant Internal Security Minister Orwah Ojodeh told the BBC a new camp would not be a solution to the hunger crisis.

Instead, food relief should be provided inside Somalia as hunger, not insecurity, was the reason most refugees were heading for Kenya, he said.

But Immigration Minister Otieno Kajwang said he was embarrassed that the government was refusing open the Ifo II camp.

This was despite the fact that the UN had given Kenya tens of thousands of dollars for the camp, he said.

Mr Kajwang blamed the failure to open the camp on security chiefs and officials in President Mwai Kibaki's office.

"The problem is that our provincial administration [officials based in Mr Kibaki's office] and our security officers look at the huge influx as a threat to national security," he said.

"On the other hand, we see it as a crisis that must be managed. It is our responsibility under international law and our own law."

Mark Bowden, the UN humanitarian affairs co-ordinator for Somalia, told the BBC that Somalia was not yet facing a famine, but was "close" to one.

"The next few months are critical," he said.

The BBC's Will Ross in the Kenyan capital, Nairobi, says the UN World Food Programme (WFP) is exploring every possibility to increasing its presence in Somalia.

However, the WFP says it will not be able to return to areas controlled by the militant Islamist group al-Shabab unless it receives security guarantees.

Last week al-Shabab said it was lifting its ban on foreign aid agencies, provided they did not show a "hidden agenda".

Our reporter says there is clearly a desperate need for more food distribution in Somalia.

The International Committee of the Red Cross (ICRC) is reporting a dramatic rise in malnutrition rates even in the part of Somalia normally considered to be the breadbasket of the country, our reporter says.

The government had set aside money to help drought victims, but it had "meagre" resources.

"We are appealing to the international community to take the matter seriously and to act quickly to save as many lives as we can," he told the BBC's Focus on Africa programme.

Some 10 million people are said to be affected by the Horn of Africa's worst drought in 60 years.

Somalia, wracked by 20 years of conflict, is worst affected. Some 3,000 people flee each day for neighbouring countries such as Ethiopia and Kenya which are struggling to cope.